How embarrassing, the climate has not changed in Cornwall for G7 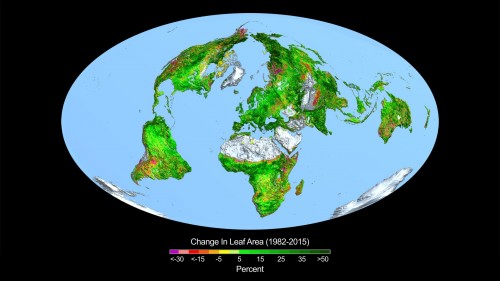 To begin, we will have a look at the weather parameters which make up the climate of Cornwall: a total of 248,250 individual weather observations covering 8,275 days.

Figures 1-3 There is no statistically significant trend of maximum, minimum or mean temperatures. 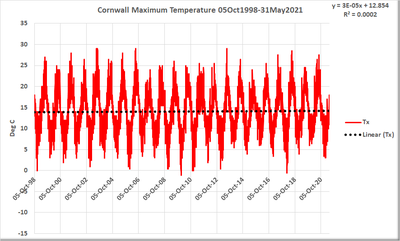 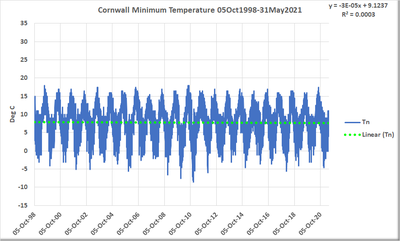 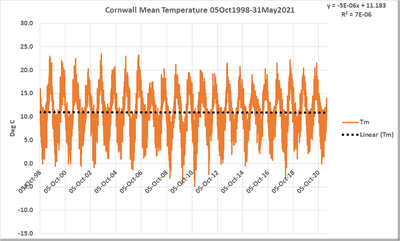 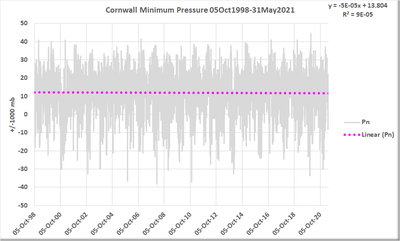 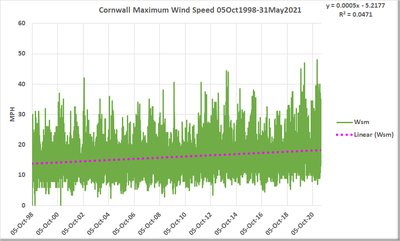 Minimum pressure and maximum wind speed are the best weather indicators of storminess.

Rainfall volume and duration are the best indicators of droughts and floods.

Figures 6 & 7 There is no statistically significant trend in either rainfall volume or rainfall duration, which indicates no greater frequency or severity of floods or droughts. 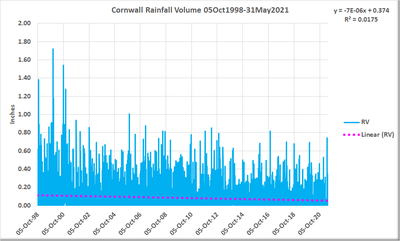 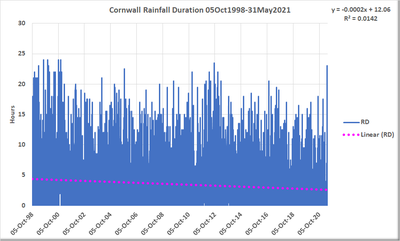 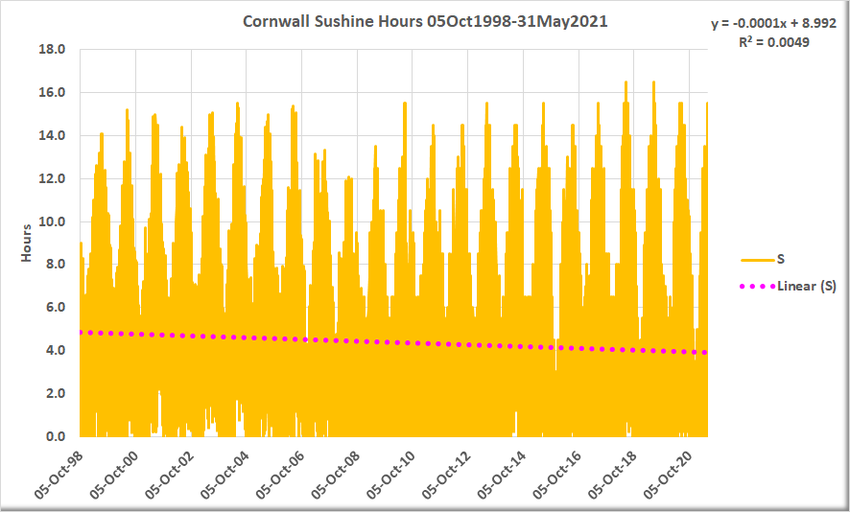 Figure 8 indicates a small decrease in sunshine hours, highly likely to be connected to low solar cycles 24 and 25

From the pages for the G7 summit:

The first two subjects are related to carbon dioxide, I guess, although they do not appear to understand the difference between a solid and a gas. There is no empirical evidence that CO2 is increasing temperatures in Cornwall. 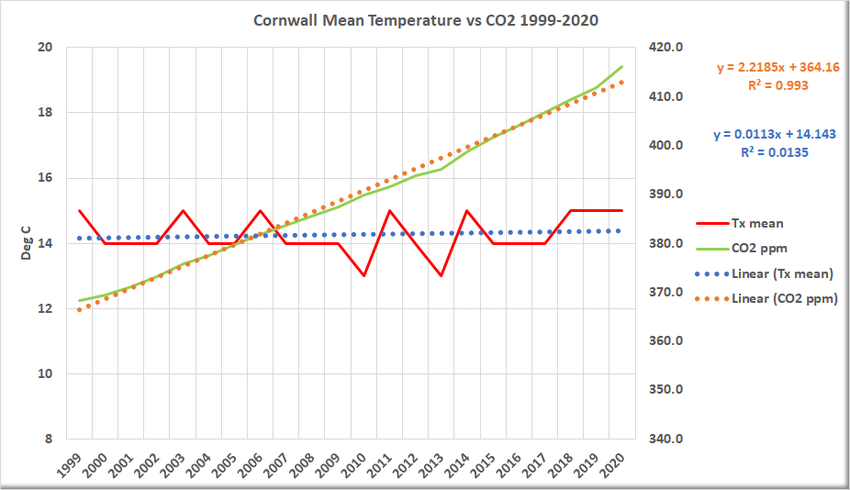 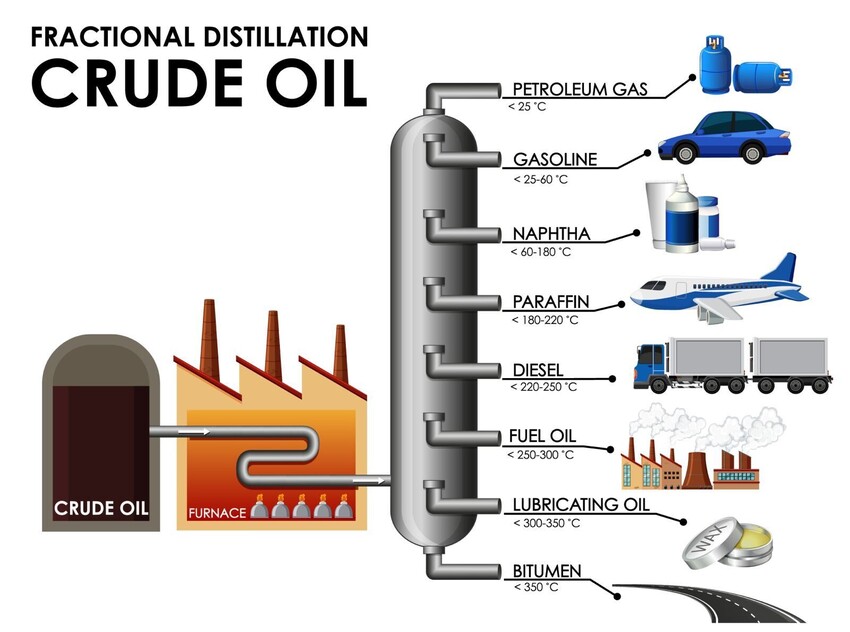 Nearly every single modern-day convenience is made from carbon. If advocates of dangerous climate change insist everyone should significantly change their comfortable lifestyles, why don't they set us an example based on the image to the left, by not using anything made from carbon-based products, which means:

If the government really mean carbon, these are the consequences:

• NO vehicles (including bicycles)
• NO domestic appliances including refrigeration, freezers, cookers, microwaves, TV's
• NO computers
• NO laptops
• NO mobile phones
• NO foreign travel
• NO staycations (unless walking only in bare feet)
• NO medicines
• NO electricity
• NO gas
• NO wind turbines
• NO nuclear
• NO solar power
• NO synthetic clothes
• NO natural clothes made from or transported by machinery
• NO food using transport vehicles (so only home grown)

This is what NET ZERO CARBON means Welcome to the DARK AGES.

The next two items on their agenda is resetting our relationship with nature (whatever that means) and driving action to halt and reverse biodiversity loss (whatever that means). Excuse me for laughing at this point. If only they had performed a miniscule amount of research, the image to the right explains their knowledge.

"From a quarter to half of Earth's vegetated lands has shown significant greening over the last 35 years largely due to rising levels of atmospheric carbon dioxide, according to a new study published in the journal Nature Climate Change on April 25."

There is nothing wrong with the nature of Earth. Do they even understand the magnitude of nature? Under the capitalist system we have developed over a few hundred years, live expectancy has greatly increased, poverty has greatly decreased, crop yields have steadily increased, there are less people dying from starvation. Why do these people want to change this? 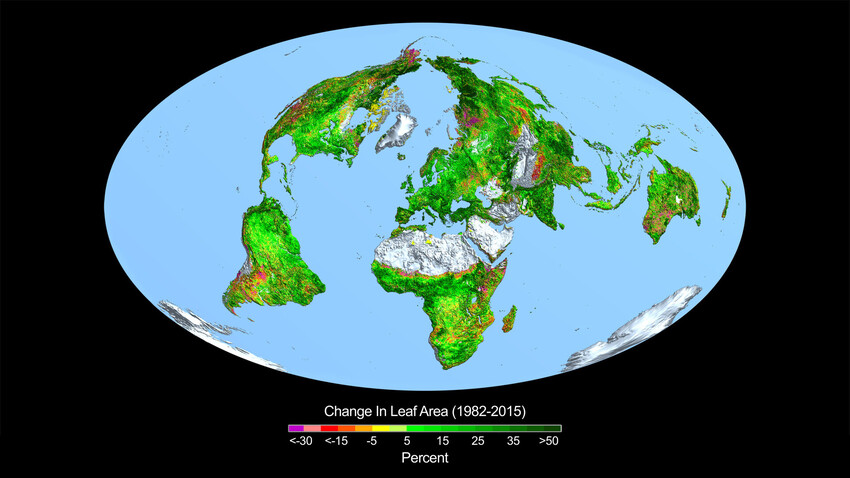 Next on the agenda is ocean action, what does this mean? Meaningless jargon! I will have to try and interpret, perhaps they mean ocean acidification or sea level rise?

Anyway, if only they understood basic science, it is impossible for the oceans to be acidic, they will always be alkaline. Sorted that one for them.

This current trend is in line with the recovery of the Little Ice Age. At the current trend it would take 520 years to reach just 1m. To put that into perspective some of the highest tides in the UK are 16m, nothing to worry about, sorted that one for them. Do these people ever do research using empirical data?

The sixth point on their agenda is tackling illicit threats to nature another meaningless piece of jargon.

How do they know what is happening to nature as per driving action to halt and reverse biodiversity loss when the world's vegetation has been growing by 14% over the last 35 year. Do they know anything about nature? Very simply they are now clutching at straws, the oceans cover 362m Km2, Is it even possible to know what is truly going on in that huge area? Nearly all the scary literature which has been publish has been vilified by other eminent scientists, expert in their fields. I suspect most changes to biodiversity are caused by natural variation, apart from the ones listed below.
.
The real crimes against nature and biodiversity
.
Here are a few illicit threats to nature, onshore wind turbines kill millions of birds, bats, and insects which other birds feed on. Offshore wind turbines disrupt migration patterns of birds, fish, and sea mammals. Solar voltaic farms are killing the ground and the diversity of life beneath them, ruining the areas for future agriculture and food for people. Mining rare-earth metals to be used in weather dependent and inefficient methods of electricity products is despoiling nature. Not to mention the spread of industrial units in natural environments. When these "so-called green energy producers" come to the end of their lives, how will they be disposed, not in land fill as they contain dangerous chemicals. What is the G7 going to about these issues?

The weather and climate in Cornwall is as stable as it could be, nothing which these politicians and/or their advisors thinks is happening to the climate is actually happening. I notice they have not mentioned global warming, emergencies, disasters, or whatever is today's woke adjective. As none of these events are occurring, they are now more worried about nature, with the inference the weather is the cause for the state of the natural world they think exists.

Nothing which these hypocrites pronounce is happening in the real world, the world is in good order. They are scientifically and environmentally illiterate.

So onwards to the next gabfest, COP26 in Glasgow later this year when between ~20,000 hypocritical people will travel from all around the world,using carbon-based transport and telling us we can't go on a foreign holiday.

Monthly updates for COP26 can been found at COP22=[https://www.weather-research.com/articles/countdown-to-unfcc-cop26-glasgow].