Welcome to a completely new understanding of consumer behaviour

All retailers currently suffer from out of stocks, over-stocks and waste. Retail News analysis shows over $1 trillion is lost every year due to these problems. Using our new understanding, you can almost eliminate these situations.

Figure 1 shows how forecast demand models based on consumer behaviour cause Out of Stocks, over-stocks and waste.

Consumer Desire is what drives sales. The big question is; what is consumer desire?

If we take consumer to be human and desire to be need, we can look at Maslow's Hierarchy of Human Desire. 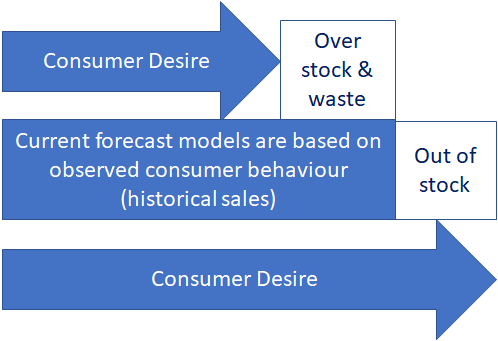 In 1970 Maslow redefined the bottom-line needs to:

How do we fulfill these needs:

From this information, we can observe; gases, heat, light/dark, and water are all weather elements. We also recognised the need for a balancing mechanism. As these are fundamental bottom line needs, they are physiological, not psychological, suggesting the actions we take to satisfy our need for food, drink and comfort are taken unconsciously. [The biological science is shown below and Weather & Life/Genetics pages]. 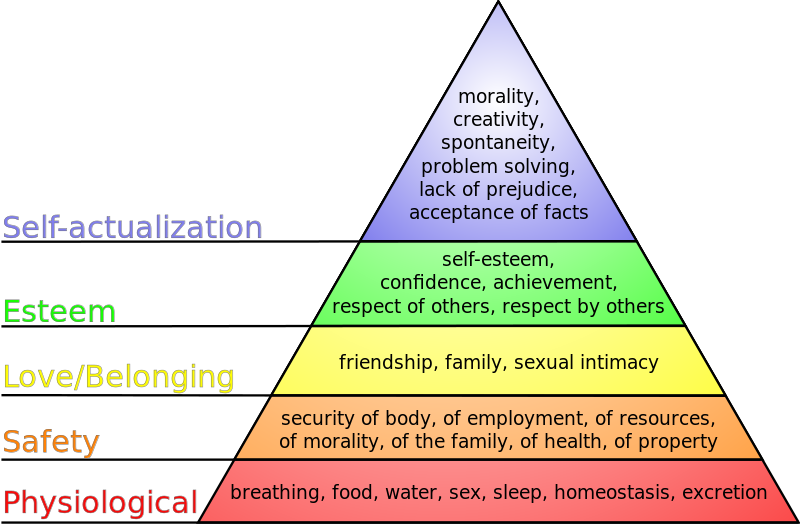 Weather changes our biological signalling hormones (the balancing mechanism), which changes our genetic response hormones. These changes dictate what we desire to eat, drink and what we need for our comfort, at a fundamental level.

We tested the CDI on 50 different products, in 10 different stores for 5 major retailers. The "raw" sales data is corrupted with, potential out of stock, over-stocks, waste plus many other conditions which skew these data. We use a robust data cleaning process to achieve the following results.

In this section we first show an example of the EPoS sales of Lettuce (raw data) vs the Consumer Desire Inded (CDI) (raw data).

Then we show an example of the CDI forecast model vs actual sales. This example has gone through 5 stages of cleaning to produce the final model.In this model you can still see the zero sales for stores closures at Easter, Christmas and New Year.

The Consumer Desire Index can be forecast up to 14 days in advance, for any location on Earth

Once the final model based on the CDI is complete, then it is up to the marketing team to add expected promotional volumes.

An added bonus for the marketing team is they can analyse and evaluate past promotions using the CDI to produce more accurate future promotional activity volumes.

Using the CDI and the logical model building method it is possible to greatly reduce the problems of out of stocks, over-stocks and waste.

Using the CDI will significantly change the way you think about your customers and how your actions can fully satisfy their desires leading to increased sales, better margins and overall improved bottom line..

A bit of biological science behind Consumer Desire

As an example, we followed the pathways of the photoreceptor cells. Photons, either Ultraviolet (UV) or Infrared (IR) wavelengths, enter the human body through the retina of the eye and are received by rods, cones and intrinsically photosensitive retinal ganglion cells (iPRGC). A photon is first received in the mitochondrial sac of the iPRGCs, just behind the retina membrane, where electromagentic energy is converted to electrochemical energy. Durimg UV stimulus, a small biochemical compound synthesises and releases one neurotransmitting hormone and, during IR stimulus a different hormoneone. These were the same two hormones we found with elevated levels in the high/low carbohydrate foods. Weather & Genetics

The information in the form of the neurotransmitteres is then transferred to the suprachiasmatic nuclei of the hypothalamus via the retino-hypothalamic tract. From there, the information is transferred to the endocrine system, where, depending on the hormone received, switches on or off endocrine re-signalling hormones, which are then transmitted back to the hypothalamus. Is this the biological coping mechanism?

We considered at this stage, the processes were unconscious. Investigations of the hypothalmus, limbic system and circumventricular organs followed.

Only molecules less than 500 Daltons can pass into the conscious brain. The actions of signalling hormones and their neural pathways do not appear to cross the blood-brain (CSF)-barrier.

From this information, it is logical to assume we have two brains: the consious one (cerabal cortex, cerebellum, brainstem and spinal cord) for thought, learning, emotion and memory, and the unconscious brain (outside the blood-brain/CSF-barrier), which conducts physiological tasks necessary for balance (homeostasis), protection and survival (immune response). We also noted, as the small compond in both UV/IR modes were less than 500 Daltons, and could easily pass through the blood-brain/CSF-barrier.
The conscious brain cells also needs to maintain metabolism, growth, homeostasis, have an immune response system and deal with apoptosis.

As the small compound has two structures, a weak bonded stucture during UV radiation which synthesises one hormone, and a strong bonded during IR stimulus, which synthesises the other hormone. Perhaps it does not release the hormones in the mitochondrial sac but carries them as a neurotranmitter to the hypothalamus and then releases either neurotransmitter hormones?

This evidence so far suggests, what our body needs in terms of essential nutrients (food) water (drink) and comfort are unconscious actions to maintain homeostasis triggered by weather stimuli. Maslow's theory "Hierarchy of Human Needs" appears to be valid. 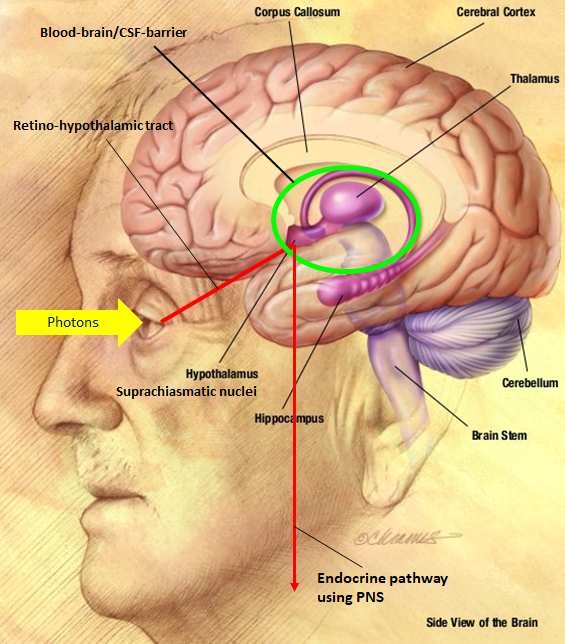