^Net Zero Carbon is a meaningless phrase made up by politicians with their concern that carbon dioxide is going to create global warming, climate change, a climate emergency, or a climate catastrophe.

To begin with they obviously do not understand basic chemistry as carbon is a solid and as such cannot remain in the atmosphere for long, in its base form. Carbon dioxide on the other hand is gas which is mixed within all the other atmospheric gases.

Carbon dioxide (CO2) is an invisible gas in the Earth's atmosphere accounting for 419 parts per million (ppm) or 0.04% of all atmospheric gases. CO2 is a vital gas for all life to exist, being a major part of the photosynthesis process. When levels of CO2 fall below 170 ppm life would not be viable.

The Intergovernmental Panel on Climate Change (IPCC) have a hypothesis which says CO2 is a well-mixed in a dry atmosphere and rising levels of CO2 will increase temperature. Their latest idea is a doubling of CO2 based on 280ppm to 560ppm will lead to a temperature increase of 1.5°C.

The doubling of CO2 is based on the level in March 1958 when monitoring began in Mauna Loa, Hawaii which at that time was 280 ppm.

The IPCC say man-made emissions are 3% of total atmospheric CO2, which makes natural carbon dioxide 97%, which is 406.7 ppm and 0.0406% of atmospheric gases. 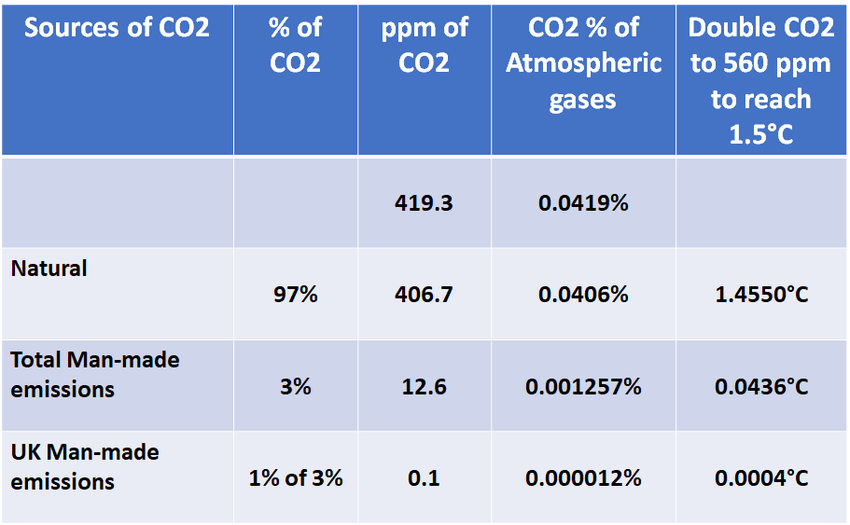 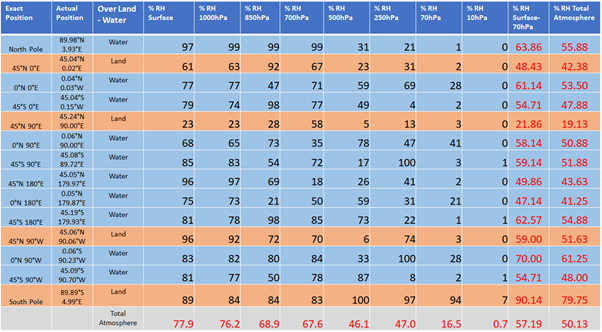 The IPCC have got at least two fundamental things wrong:

The IPPC suggests CO2 is a well-mixed gas in a dry atmosphere.

Readings were taken for Relative Humidity (RH) levels at 14 locations around the globe, 4 land and 10 oceans, and at 8 heights, from surface to 10hPa (hecto-Pascals).

RH is higher at lower levels decreasing to almost zero at 10hPa. RH levels are lower over land than over water. The average global level of RH within the atmosphere is 50.13%. Which shows the atmosphere is NOT dry.

The IPCC suggest CO2 is a well-mixed gas in the atmosphere.

When NOAA sent a satellite (OCO2) into space to monitor CO2 in 2014, the result is shown in figure 1.where It can be clearly seen, higher concentrations of CO2 are over the major rain forests, other large forests, tundra, and warmer oceans of Earth. The southern area of high concentrations is along the line of the Inter-Tropical Convergence Zone (ITCZ) a natural weather oscillation.

These large areas of high concentrations are caused by the carbon cycle where plants and planktons naturally suck in large quantities of atmospheric CO2 to enable photosynthesis and growth. All of which shows, CO2 is NOT a well-mixed gas in the atmosphere. 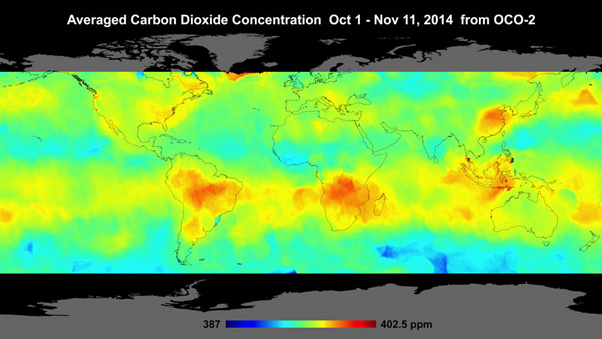 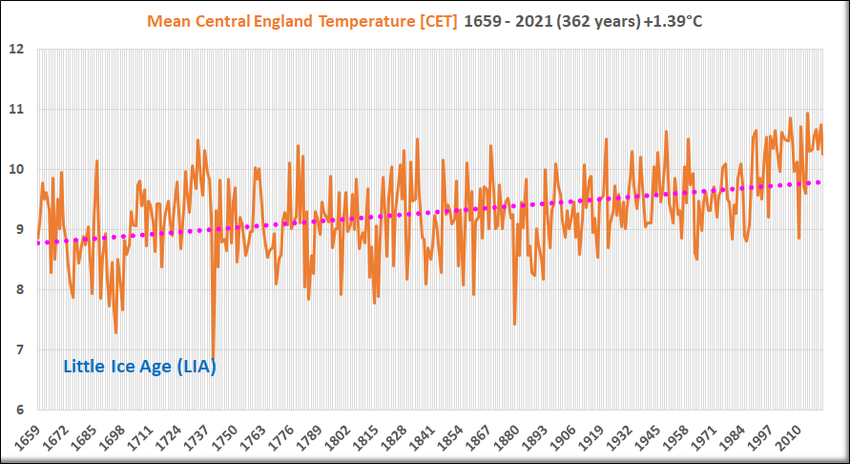 Using the above information, we can look at how temperatures have progressed over time and their relationship with carbon dioxide.

The longest running record of temperature in the world is the Central England Temperature (CET) in the UK.

The large dip in 1740 was caused by the volcanic explosion of Mount Tarumae, Japan which had a major eruption in 1739. This shows the significance of major volcanic eruptions can have on Earth's temperatures.

Does this mean CO2 is having less effect on temperature as time progresses?

Or does a natural increase in temperature cause CO2 to increase (Charles' law)? 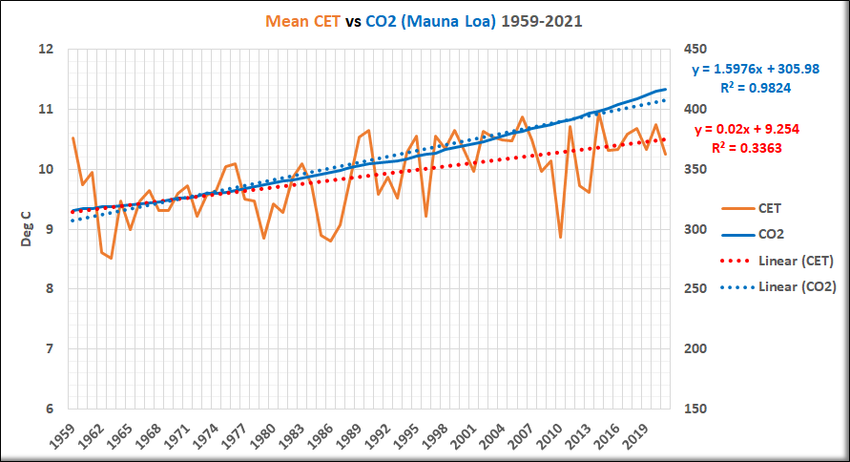 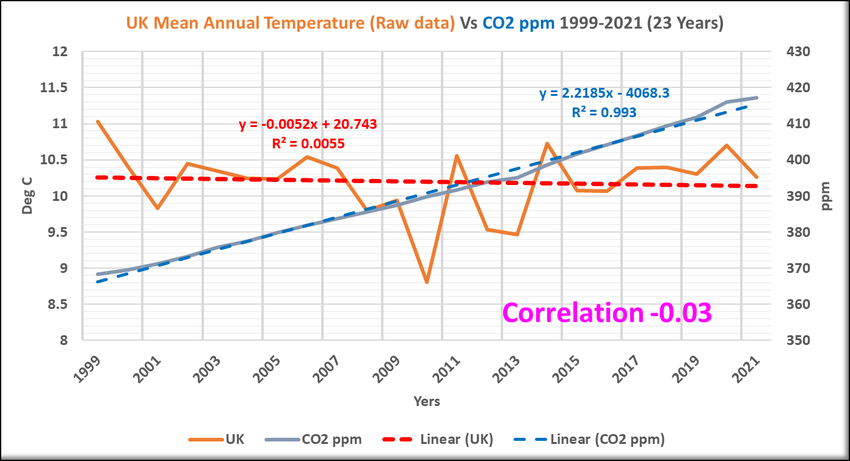 Weather Research has been collecting raw daily weather data since October 1998. We collect data for 28 locations in the UK, including daily max, min and mean for pressure, temperature, dew point and wind speed, as well as relative humidity, sunshine hours, rainfall volume and duration.

In this period whilst CO2 levels steadily rise, the temperature trend has been negative albeit statistically insignificant. It does show that carbon dioxide has NOT increased temperature in the UK for the last 23 years.

The facts about CO2 and temperature:

CO2 is a minuscule portion of atmospheric gases (0.04%) natural CO2 (97%) is by far the greatest quantity and total man-made emissions of CO2 of just 3% is not a significant factor in comparison. The UK's emissions of 1/10th of a molecule is completely trivial.

Considering the hottest temperatures on Earth reach 47°C, and the coldest -79°C a spread of 126°C, nobody would notice a 1.5°C increase.

How does the IPCC hypothesis hold up?

IPPC claim CO2 is a well-mixed gas in a dry atmosphere and a doubling of CO2 will increase temperatures by 1.5°C.

Firstly, their claim that Earth has a dry atmosphere is FALSE, from the empirical evidence shown in table 2 Relative Humidity (RH) shows the atmosphere of Earth has a RH of 50%.

*Secondly, their claim of a well-mixed gas is FALSE, from the empirical evidence of the OCO2 satellite which shows CO2 is not a well-mixed gas in the atmosphere. It shows the natural process of the Carbon Cycle.

Nature 100 -IPCC 0, another massacre by nature.

Does CO2 increase temperature as the IPPC suggests?

Using the worlds longest running record of temperature (the CET 1659 to present) against the longest running record of carbon dioxide (Mauna Loa 1959-present) a plot of CET from 1959-present and CO2 from 1959 to present (Fig 2) shows the temperature has increased by 1.39°C. Considering the CET began during the little ice age, it is little surprise to understand the recovery from this cold period of time.

In figure 3 a plot between CO2 and CET (1959-2021) shows a divergence between the two, where the CO2 trend is increasing greater than the temperature trend.
In figure 4 we see in the UK for the last 23 years, an increasing trend of CO2 and no temperature rise

I really am not sure why the IPPC and "green" thinking people want to keep playing this game anymore.

From the conclusions of this empirical research I suggest NET ZERO CARBON is an absolute waste of time, effort, very expensive and will have dire consequences on the lives of a huge proportion of the world's western societies.
Globally countries adopting NET ZERO CARBON policies should abandon them immediately for the good of their populations. In the UK, where NET ZERO CARBON is incorporated into the Climate Change Act 2008 must be repealed immediately as there is NO empirical scientific evidence carbon dioxide is a problem.