The Sun and Water (Solid, Liquid & Gas) controls the weather and climate - NOT carbon dioxide 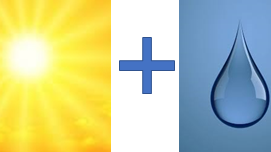 Relationships between Sunshine, RH and Temperature:

The relationship between RH and maximum Temperature (-0.42), whilst weaker than the other two relationships, can be explained as, higher RH, less sunshine, then lower Temperature. We have all experienced a sunny Spring day, when a cloud covers the sun, the temperature can drop a few degrees. The RH in cloud will be close to or at 100% and given the right conditions, condensation will change the water state from gas to liquid or ice (solid state) if high and cold enough. It all depends on the prevailing airmass and time of year (position of Earth to the Sun). 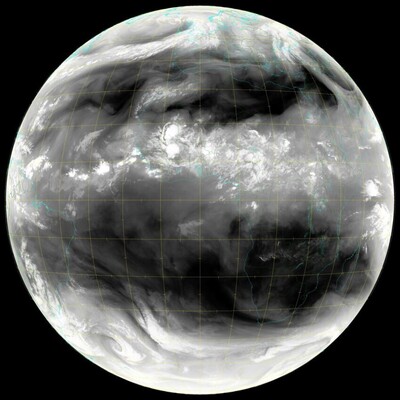 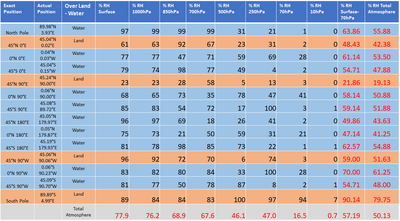 Sunshine hours are recorded at the Earth's surface, but the sun's UV radiation has to pass through the Earth's atmosphere where Water Vapour (WV) is present, but how much?

Figure 2 is a Modis satellite image taken in the Water Vapour spectrum, the whiter the shading the higher the water vapour and the darker shading show drier air. The lighter area running around the equatorial region is the Intertropical Convergence Zone (ITCZ), high water vapour levels inside cumulonimbus clouds.

In the following summary from an experiment to see how much water vapour is in the atmosphere we see the Earth's atmosphere has 50.1% RH. This figure is up to and including 10hPa, the tropopause never reaches this height, it is over the top of the atmosphere (TOA). The highest it reaches is roughly just under 70hPa (18000m) in tropical thunderstorms. As RH is the percentage of saturated air, it can be said that the atmosphere is 50% saturated.

Fig 3 RH surface to 10hPa at 45° spread Latitude/Longitude
Figure 3 shows Earth's atmosphere has an average RH of 50%. Prior to condensing into liquid, water vapour, thus RH is higher inside clouds at all levels from the surface to 18,000m (~60,000ft) in tropical thunderstorms.

Now, if we look at the relationship between CO2 and temperature, we see the following. 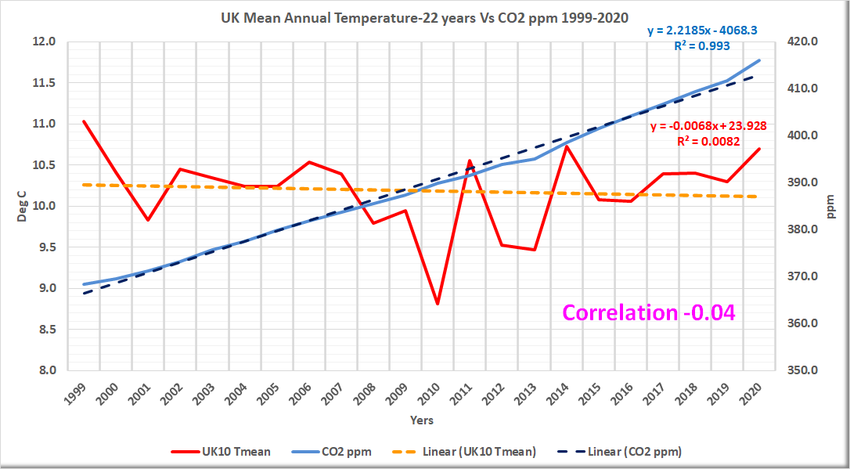 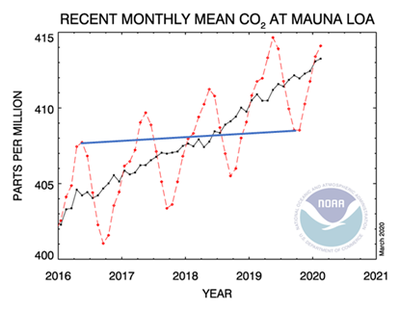 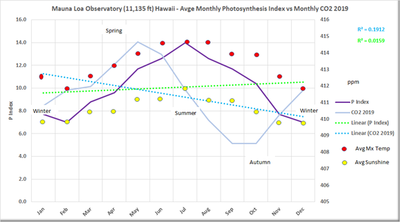 If CO2 increases temperature how does it fall from spring to "fall"? It is obviously seasonal, but CO2 does not make the seasons, that is most definitely the Earth's position in relation to the Sun.

From a History of Mauna Loa Observatory:

"Even just months into the program, the monitoring at Mauna Loa was already producing revolutionary results. In November, when Charles Keeling first made the winding trek up the volcano, the measurements showed the concentration of carbon dioxide increasing—slowly, but steadily. Then, in the summer months, the opposite happened, with carbon dioxide concentrations dropping. The pattern repeated itself, almost exactly, during the second year of measurements. Keeling was fascinated."

"We were witnessing for the first time," he wrote in his autobiography, "nature's withdrawing CO2 from the air for plant growth during the summer and returning it each succeeding winter." They had, in essence, captured a picture of the northern hemisphere drawing and releasing breath—exhaling carbon dioxide as forests turned bare for the winter, and inhaling as the leaves returned each summer.

These statements show CO2 is not a well-mixed gas in the atmosphere, it lower in summer and increases in winter at Mauna Loa (Northern Hemisphere). Temperature is higher in summer and lower in winter at Mauna Loa (Northern Hemisphere). Therefore, with higher temperature, CO2 is lower or with lower CO2, temperature is higher, which is contrary to the IPCC hypothesis that CO2 increases temperature. Keeling was observing a perfectly normal natural phenomena.

After reading this I investigated the relationships between mean monthly: sunshine, temperature, our Photosynthesis Index, and carbon dioxide at Mauna Loa.

Fig 6 levels of CO2, photosynthesis Index, sunshine hours, temperature & CO2 Mauna Loa, Hawaii
The most notable aspect of this analysis was the correlations between each measurement.

The relationship between temperature T and CO2 is statistically insignificant, which means it is almost impossible for carbon dioxide to increase temperature.

As we know temperatures from the surface up to the tropopause get cooler. This temperature decrease with height is shown in figure 8 from a radiosonde balloon soundings over Prague, Czech Republic 18Jun2020 00Z and 09Feb2021 00Z.

The big question here is, if as assumed by the IPCC, that carbon dioxide is a well-mixed gas in the atmosphere and CO2 increases temperature, how can it possibly get colder both in height and between summer and winter? 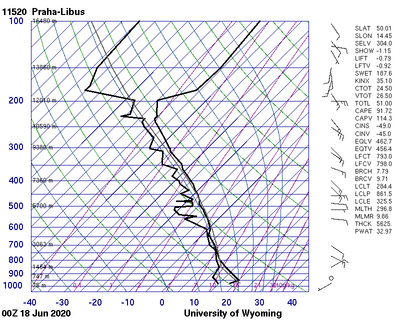 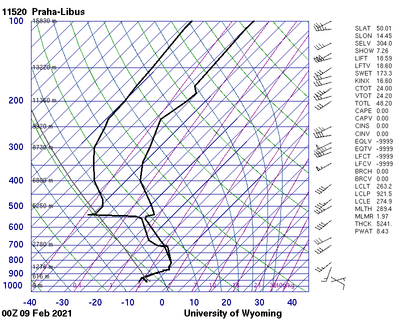 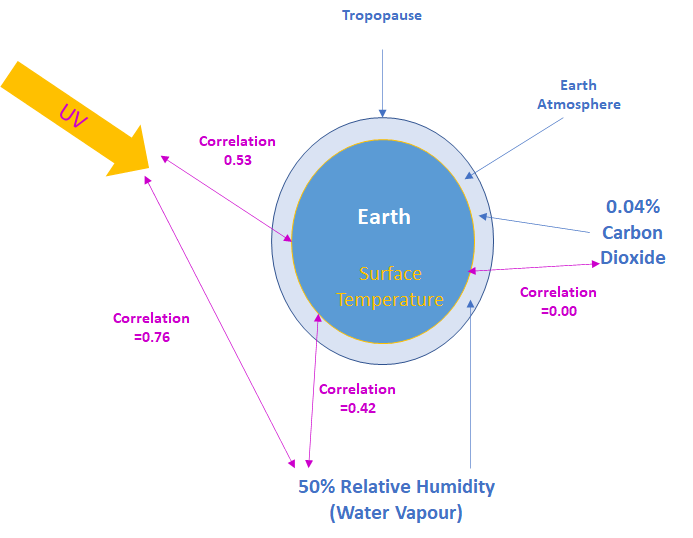 A summary of relationships within the atmosphere:

Fig 9 provides a summary of the relationships of sun (UV), RH, T and Co2

Carbon dioxide's relationship with surface temperature is insignificant and shows it does not increase the surface temperature
.
The Sun + Water in its three states (Solid, Liquid and Gas) controls the weather and eventually the climate.